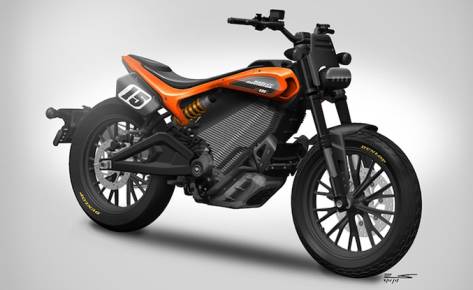 From the 4th quarter of 2021 earnings meeting Harley-Davidson Has disclosed information of a new subsidiary company that has just split apart, LiveWire, a brand of electric motorcycles directly. and it was revealed that the new model It will be the company’s second ready-to-ship vehicle in the second quarter of 2022.

LiveWire is a new company that has recently branched out from its mainstream brand. Harley-Davidson With a standpoint in the production, development and distribution of electric motorcycles exclusively, which has been acquired by ABIC or AEA-Bridges Impact Corp and partner Kymco, a specialized scooter manufacturer from Taiwan. is in charge of developing and distributing The Q4 2021 earnings conference held just a few days ago revealed that LiveWire is preparing to push its second model to the market, LiveWire S2 Del Mar.

Jochen Zeitz, Chief Executive Officer of Harley-Davidson and LiveWire announced that the next electric model will debut in the second quarter. The new release, called LiveWire Del Mar, will be based on the brand new ARROW, modular, scalable platform and will be the company’s new flagship platform. for marketing in electric motorcycles in a smaller size And it’s very inexpensive.

A document sent to ABIC shareholders provides further details on the Del Mar and ARROW architectures. The ARROW platform was developed in-house by the LiveWire team incorporating a battery pack. electronic equipment and the motor is the main component in the chassis. Optimizing performance, weight and cost.

The new battery pack will consist of 21,700 cylindrical cells, a relatively new form of lithium-ion cell size used by companies such as Tesla, Samsung and LG. common, while also claiming to have better security and reliability.

The ARROW platform includes a DC-DC converter, inverter and on-board charger. Shared components such as cooling circuits and wiring harnesses to reduce size, weight, and shared chips to reduce the number of microprocessors required.

The drive motors are developed by the LiveWire research team with a proprietary Direct-Drive Magnetics design. and power configuration adjustable The platform to be used on Del Mat will be the S2 version, optimized for middleweight performance. The manufacturer has not yet disclosed the look of the platform seriously. But the assumption is that it will be similar to the previously published concept drawings inspired by Flat Tracker motorcycles.

The shareholder document also confirms that Del Mar will be able to receive Over the Air (FOTA) firmware updates to remotely tune the vehicle’s systems, alibrations and algorithms without the need for lead. The vehicle is serviced to a service center. FOTA updates can also enable new features and functionality. It’s unclear, though, that LiveWire will follow in the footsteps of Zero and the Cypher III+ platform in revamping the charging system and updates. In addition to the launch?

Harley-Davidson It said it would offer investors for both HD and LiveWire in May. which is likely to occur after the merger LiveWire-ABIC is now complete, it’s possible we’ll get more news about LiveWire Del Mar in the coming months.