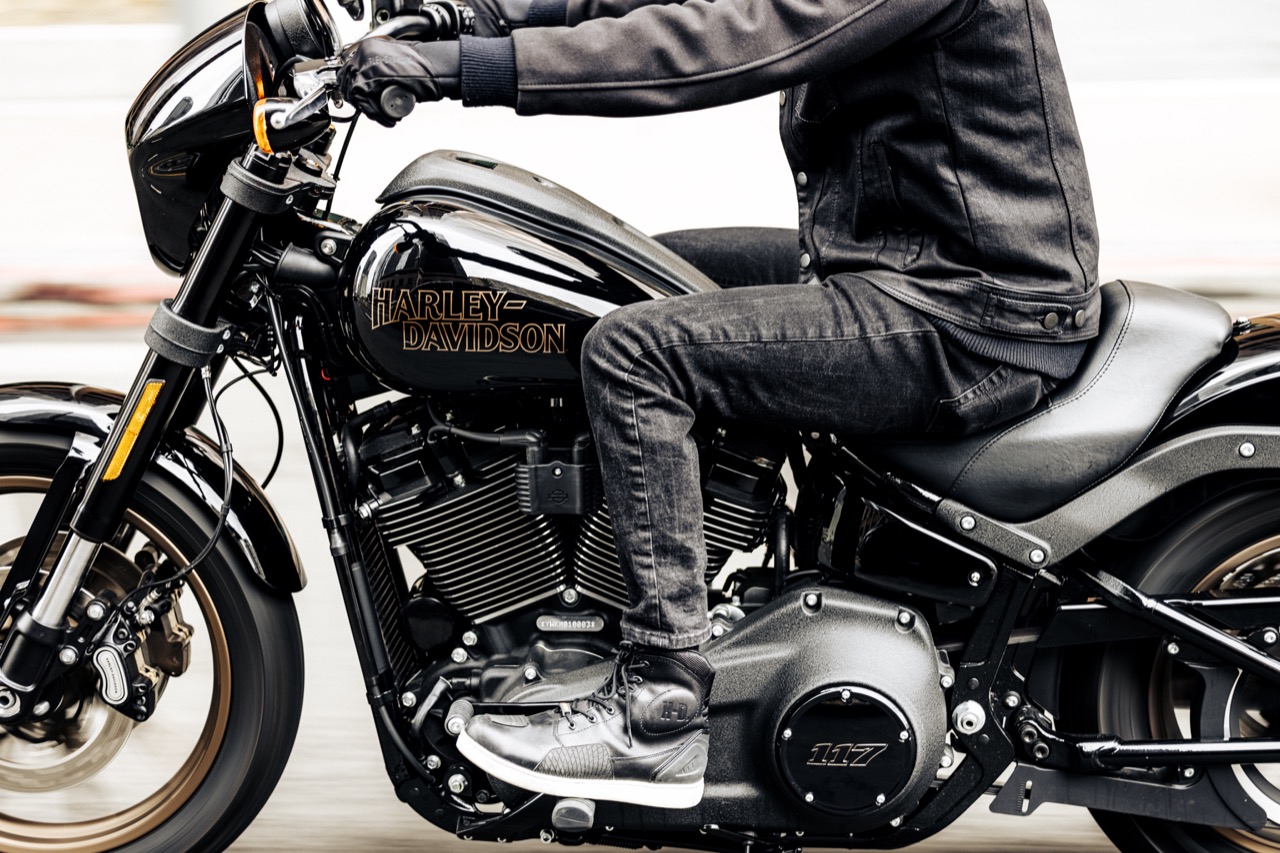 A vibrant combination of the Softail frame and the character expressed by the Milwaukee-Eight 117 V-Twin Propslore. This is the chemical formula for the new Harley-Davidson Low Rider S (even more powerful) and Low Rider  ST models in the 2022 Cruiser Roundup.

The Low Rider S 117 is designed for the rider who appreciates power, while the Low Rider ST gravitates towards touring thanks to a fixed fairing and hard bag.

A Cruiser model offered in Vivid Black and Gunship Gray and available this spring at authorized Harley-Davidson dealers.

Instead of the tank console instrumentation seen earlier in this example, there’s a new analog tachometer with a handlebar-mounted digital speedometer, closer to the driver’s line of sight. The tank console is black with FXLRS badging and rests on the fuel tank, it also has a similar LED headlight and taillights.

Other distinctive aspects of West Coast styling include: a color-matched mini fairing that hugs the headlight; A one-inch-diameter handlebar on a four-inch-tall riser; Control pedal in central position and individual contoured seat.

The front, the propulsion parts and the exhaust are dark, so the spoked die-cast aluminum wheels finished in matt dark bronze also stand out, achieving a contrasting effect with the dark components. This model is equipped with 19-inch front and 16-inch rear wheels and is equipped with Michelin® Scorcher 31 tires. 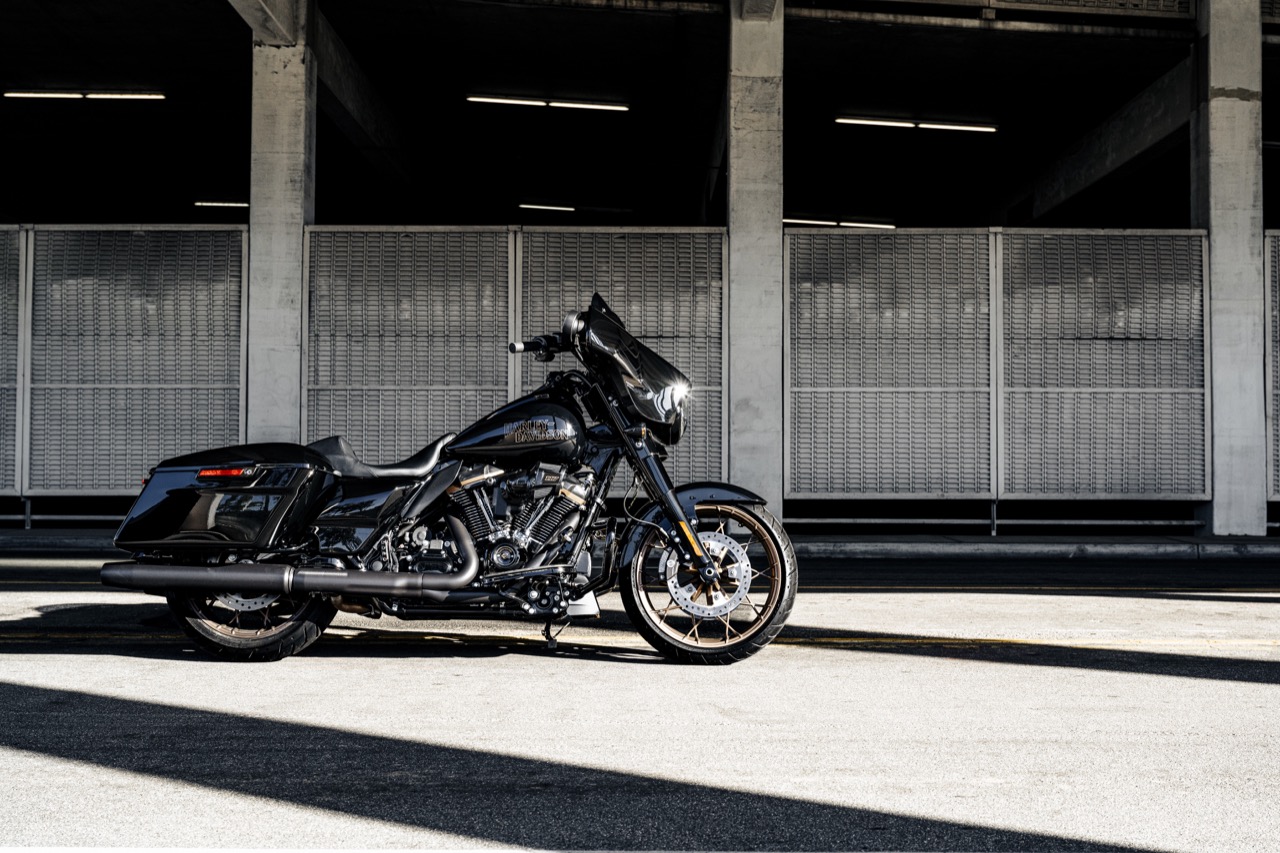 Inverted fork makes the front end responsive and consistent under braking. The fork rake is 28 degrees. The taller rear monoshock, also featured on the Low Rider ST model, raises the rear area to promote ride comfort and a lean angle of more than 1.3 degrees compared to the previous model.

Hydraulic preload adjustment under the saddle allows you to preserve suspension performance under various loads and riding conditions. It also highlights the double front brake along with the 300 mm disc with ABS as standard.

A sport-touring model inspired by the “long bike” landscape of California. Available in Vivid Black and Gunship Grey, it will be available at authorized Harley-Davidson® dealers starting next spring.

The new fairing was defined by CFD (computational fluid dynamics) analysis and on-road evaluations. The triple SplitStream air intakes stand out, which reduce the impact of the wind on the rider’s helmet, even at high speeds. Pictured is 14.6cm LED headlight and 15cm tall dark smoked windshield.

The dark vision is highlighted by several other gloss black bike elements along with a wrinkled black finish on the drivetrain. The forks are black anodized and also highlight the jet black exhaust and the 19-inch and 16-inch die-cast aluminum wheels, which have a matte dark bronze finish. 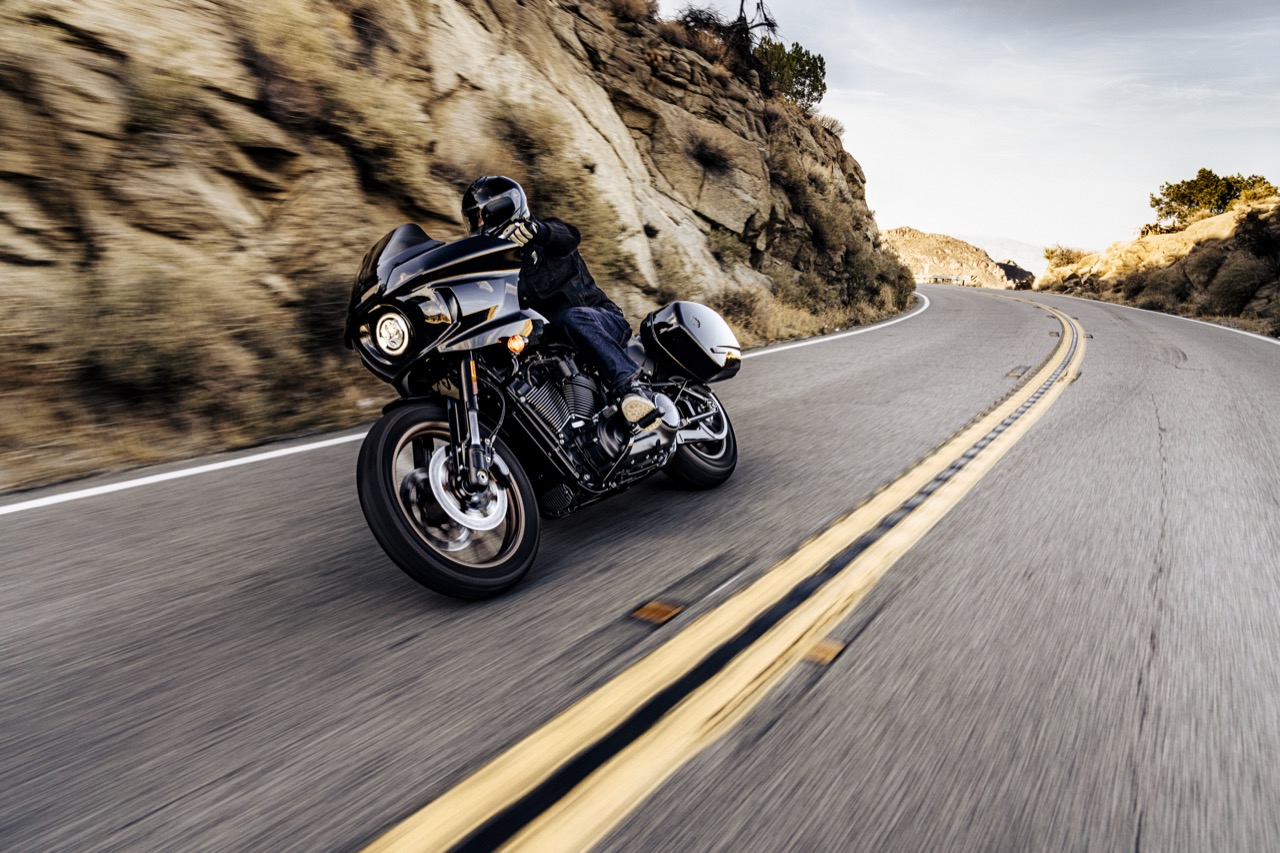 Harley-Davidson® audio powered by the Rockford Fosgate fairing kit (compact 250-watt amplifier with DSP digital signal processing technology, 5.25-inch woofer, and pair of two tweeters); A contoured single-seat saddle that, along with the raised rear suspension, supports a commanding stance and long, narrow saddlebags that can be removed to make the model look like a cruiser. The lockable hard saddlebag features a clamshell design and a cushioning device that allows the lid to open without breaking. The total capacity reaches 53.8 liters.

The frame is optimized for weight management with a firmly attached Milwaukee-Eight 117 heart. The 43mm single-cartridge inverted fork provides consistency to the front end and the fork rake is 28 degrees. As mentioned, the rear monoshock is taller than the standard Softail®, providing greater ride comfort and increasing the lean angle by more than a degree. In addition, the hydraulic adjustment of the preload under the saddle, according to indications, promotes optimal performance in various conditions of use.

The braking system consists of 300 mm discs as standard and double front brake with ABS. The models are equipped with Michelin® Scorcher® 31 tires 110/90B19 at the front and 180/70B16 at the rear.

The Milwaukee-Eight® 117 V-Twin drivetrain features an oil/air cooling system and is the largest unit available as standard. Displacement tops out at 1,923 cc (117 cu in), and there’s also a high-performance overhead camshaft linked to the heavy-breathing displacement system with a filter element, a dual-balancing countershaft to reduce vibration, and a 2-in height. -2 optimized. -Exhaust display. It indicated 169 Nm of torque.