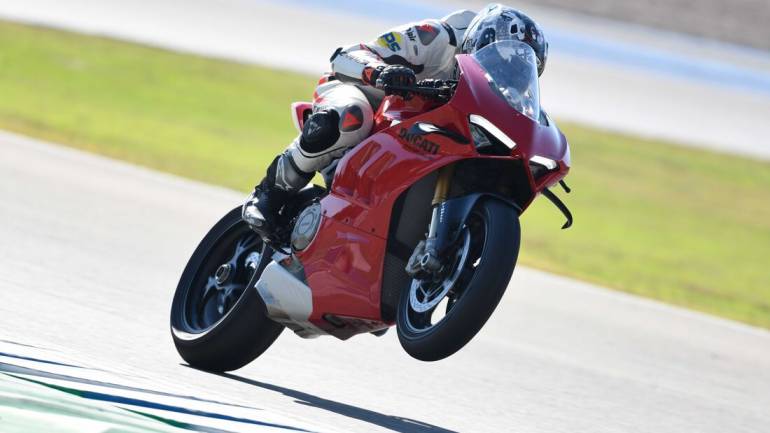 Ducati’s MotoGP superstars like Francesco “Pecco” Bagnaia, Jorge Martin or Johann Zarco use the Panigale V4 S as a training tool. With some clever modifications of the 2022 model, the potential of the V4 athlete should now also be much better usable for normal mortals. Right?

From teachers and students

At the end of the 600 meter long start and finish straight from Jerez, the braking zone climbs slightly uphill. The asphalt rises 5.1 percent and for the subsequent, very tight right-hand bend, you have to brake hard and precisely. When I do it properly and on the new DucatiPreparing the Panigale V4 S for the near entrance to the curve, a rumbling shadow flits past to my right: Wow, that was done! A MotoGP rider like Johann Zarco can only smile tiredly at would-be late brakes like me.

But it gets even worse than right after Zarco on the absolute last remaining meter to the turn-in point, a second, slightly smaller shadow brakes past me. This time it’s Jorge Martin, whom MotoGP fans know as the second rider in the Ducati Pramac customer team and rookie of the year 2021. It takes about a lap of the Circuito Angel Nieto before I lose sight of the two of them. It can’t be because of the material, because just like me, both ride a standard Ducati Panigale V4 S from model year 2022, the Ducati Profis off-season training device. 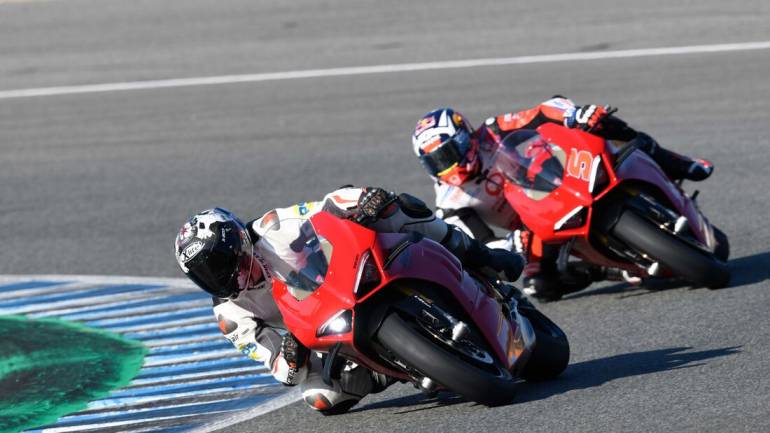 At the same time, the show shows what is possible with this production motorcycle. Although my skills are worlds behind those of the two MotoGP riders, I still feel comfortable on the new Panigale from the start. This starts with the seating position, which has been made more functional thanks to a flatter cushion in the rear area (two-tone only in the Panigale S version) and a newly shaped tank.

Means: When braking, you can brace yourself perfectly against the handlebars and slide your butt far back so that you get weight on the rear end. The fuel barrel now holds 17 instead of 16 liters, but is still slightly narrower in the lower area. This allows you to snap into the machine wonderfully and still be able to move freely on the motorcycle to control it.

The agony of choice

Since the air and asphalt are still cool in the first two of a total of five stints in the morning, we start the “Race B Evo” drive program. For the motor response and the torque output, the “Medium” mapping is stored for rolling. All other driver assistants (DTC, ABS, DWC, DSC, EBC) are already on quite sporty default settings. As far as the mappings are concerned, there are two new modes in addition to “High” and “Medium” in the current Panigale: “Full” and “Street”. As the name “Full” already suggests, the Desmosedici Stradale-V4 delivers its performance here without any electronic restraints. In “Street”, however, the maximum power is limited to 150 hp. 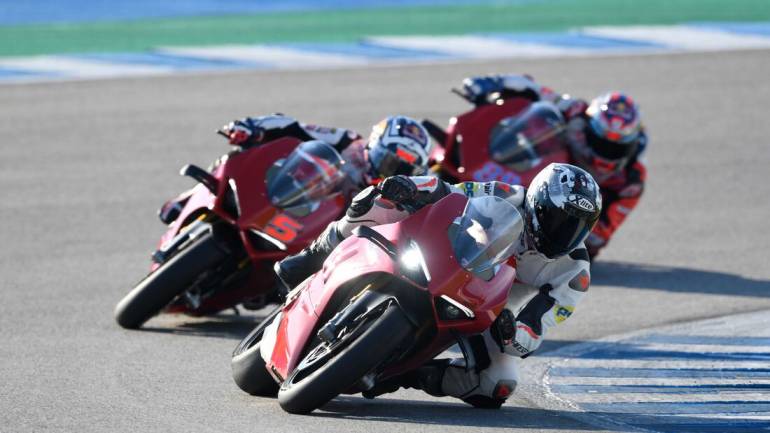 Speed ​​dating for those who have passed

The phase of getting to know the new Panigale V4 S is as short as if you had discovered the love of your life at speed dating at the first table. Seating position, electronics, chassis and engine – everything harmonizes. I quickly switch to the “Race A Evo” program, sharpen a few settings here and there and push harder in the next turn: The mapping is on “High”, the wheelie control from three to one (for less intervention) and the electronic engine brake from two to one (for more braking before cornering).

The Panigale S reacts more spontaneously in the acceleration phases, develops more forward thrust and feels more personal responsibility with the accelerator without losing the impression of absolute safety, without being noticeably slowed down electronically. Very enormous what the Panigale processes in the background without really noticing – every step towards a faster lap time feels simple and natural. In order to get a better idea of ​​what the electronics are doing, the fields for traction, wheelie and slide control are highlighted in different colors in the new race dashboard view. If one of the helpers is required in a driving situation, it flashes for a while in the corresponding color. 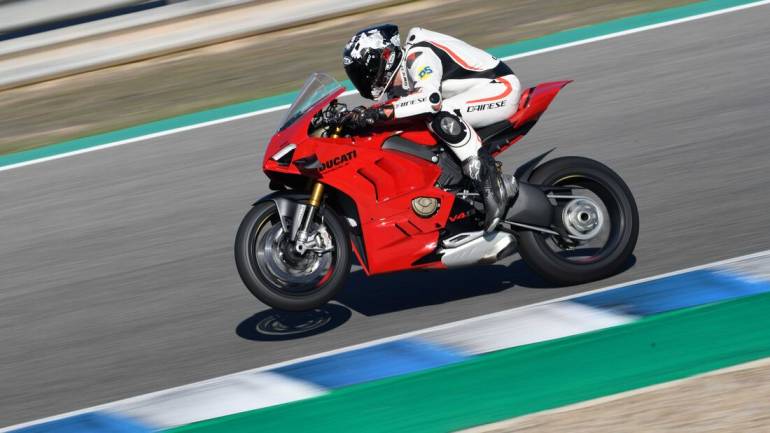 In “Race A Evo” mode, the electronic chassis is preset slightly differently than in “Race B Evo”. You can also change the various maps of the Öhlins Smart EC system (including the steering damper) in a range from minus to plus five and offer enormous possibilities for your own set-up. Important to know about the chassis mechanics: The Öhlins fork now has a closed cartridge system, is equipped with softer springs and offers five millimeters more travel. 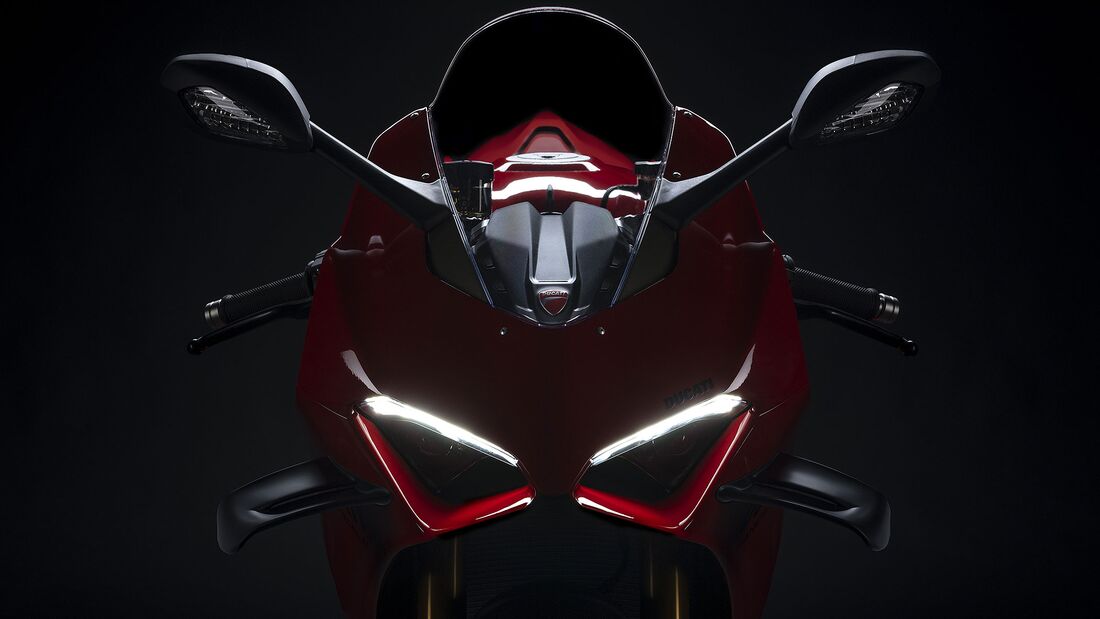 What you can do with this sensitive new front wheel control, how much feedback the fork delivers, not to mention the super-rich steering feeling via the front wheel, is, in my opinion, unprecedented in series motorcycle construction. Thanks to the pivot point, which has been increased by four millimeters, the Panigale is even more solid in acceleration phases. This is particularly noticeable when firing out of the narrower corners of Jerez, when the Panigale relentlessly claws its way into the asphalt.

Another change to the 2022 model is a longer gear ratio for gears one, two and six. Derived from the Superbike World Championship, the longer gear ratio should help you get out of tight corners faster. At least in Jerez, this works very well at four points on the course, because you can skillfully use the engine brake when entering and when you accelerate out, there is a lot of tinder on the rear wheel. 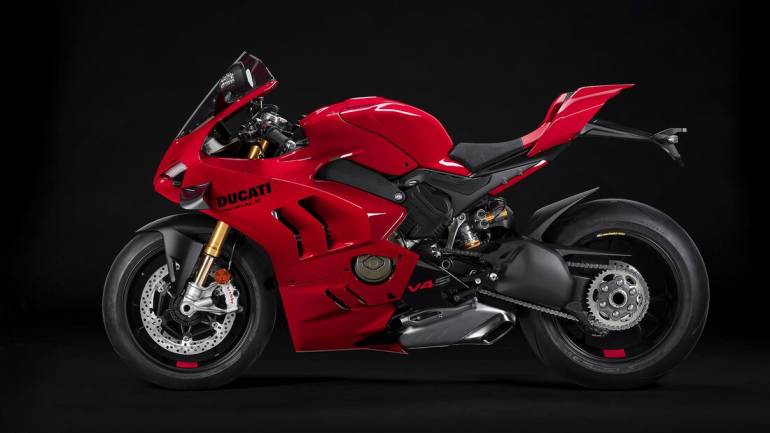 The fact that the engine delivers 1.5 HP more in the upper speed range at 13,000 rpm thanks to a smaller oil pump and enlarged outlets on the exhaust, as well as the top speed increased by five km / h, should not go unmentioned. The Panigale V4 S has always had power and potential for fast lap times – thanks to the fine-tuning from the 2022 model, it is now easier to access.

To answer the question asked at the beginning: That’s right! The new ergonomics are great for the Panigale and the fine working method of the fork was completely convincing in Jerez. The colored control lights of the assistants are a real help. However, it is also clear that you still have to work on a Panigale V4 S.