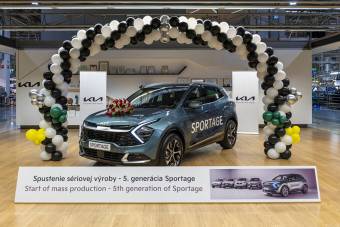 The new Kia Sportage officially kicked off production at the Slovakian plant in Zilina. In the wake of a model made in Europe since 2006, the fifth generation of the SUV of the South Korean brand aims to continue the commercial success of Kia’s best-seller, as evidenced by the more than two million units produced in fifteen years.

The new Kia Sportage, for the first time, is designed, developed and refined specifically for European motorists. The SUV leverages a distinctive design with a cutting-edge premium interior characterized by the presence of a curved display that integrates the most advanced advances in technology and connectivity.

Electrification lands on the SUV

The new generation of Sportage is presented on the market with an entirely electrified engine range . The offer consists of efficient petrol or diesel engines, both with mild-hybrid technology , flanked by new hybrid and plug-in hybrid engines , making their debut in Sportage history. All versions of Sportage, with the various types of power supplies, will be built in the Zilina plant.

All variants made in Slovakia

In addition to the front-wheel drive versions of the Sportage, the all-wheel drive variants will also be produced at the factory in Slovakia together with the GT-Line sports car . Another novelty will also come out of the Zilina plant: the two-tone Kia Sportage GT-Line, with the black roof in contrast with the bodywork.