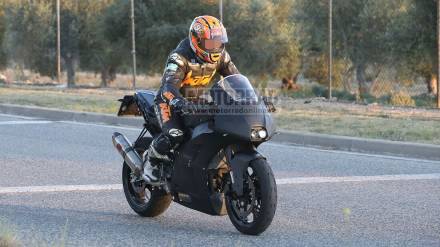 Something is happening at KTM in terms of supersport: with the RC8 C, which was only built in an edition of 100 pure trackbikes, the Mattighofen-based company has put a first derivative of their MotoGP commitment on the wheels. Despite a price announcement of over 30,000 euros, all copies were sold in no time at all. On the fan side, there is obviously a demand for a super sports model from KTM.

Frame from the Duke

KTM seems to be more broadly positioned to accommodate this: The Erlkönig of an RC8 caught by MOTORRAD hardly allows any other conclusions. The prototype, which was driven by former MotoGP rider Jeremy McWilliams, shows where the journey is headed. The RC8 for the road will be far less radical than the track bike. It starts with the frame. The Erlkönig uses the tubular frame known from the 890 Duke. The tubular space frame of the RC8 C is probably too expensive for series production. 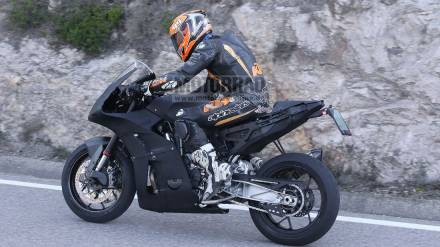 The rear swing arm of the prototype clearly comes from the 890 Duke, whereby the one in the area of ​​the strut linkage has been significantly strengthened and the area of ​​the axle mount has been lengthened. In addition, the right swing arm is shaped like a banana to provide more space for the exhaust. The filigree spoked wheels seem to come from the 890 Duke R. Likewise the brake system, whereby the Erlkönig has brake ventilation á la MotoGP. The rear shock absorber in the Erlkönig seems to be fully adjustable and relies on a hose-bound expansion tank that is still provisionally flanged to the frame. Attached to the top of the fork bridge, the RC8 carries a transversely installed steering damper.

The cooler behind the full fairing is growing significantly. The cladding itself, with its two vertical ventilation slots and the tank connection, is based strongly on that of the RC8 C. Even the jagged line in the area of ​​the steering stub was adopted from the track model. The small double headlight comes from the RC390 and still looks very provisional. The biggest difference between the RC 8 C and this Erlkönig: The track bike has the tank in the one-piece rear. The Erlkönig seems to be carrying the tank in front of the driver in the familiar place. 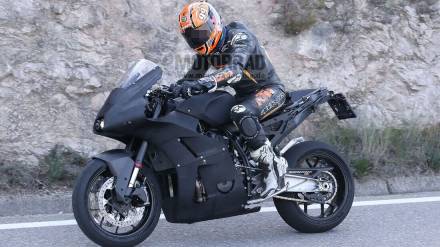 The exhaust system, which provides a fat catalytic converter at the bottom of the engine, is completely new. The notches positioned higher and further back as well as new steering stubs ensure a sportier seating position. The well-known TFT display of the sister models can be seen in the cockpit. The built-in two-cylinder looks like the 890 twin from the 890 Duke R. It offers 121 hp and 99 Nm of torque. However, observers report a new cylinder head. Maybe there is a performance benchmark here. The weight of the new sports version should hardly exceed the 189 kilograms of the Duke R’s curb weight.

Basis for the World Supersport

Since KTM officially denies a street version of the RC8 C, the supersport model will probably have a different name when it hits the street. A mid-range series sports car opens up new avenues for KTM in motorsport. The Supersport World Championship, which has just been equipped with new engine regulations, could be an ideal way of playing for KTM. Ducati has already registered here with the Panigale V2. The RC8 for the road could come for the 2023 season and price somewhere around 13,000 euros.

Even if KTM officially denies a road sport bike, the Erlkönig that is caught speaks a clear language. The Austrians are working on a fully faired 890 Duke R. It could come for the 2023 season.