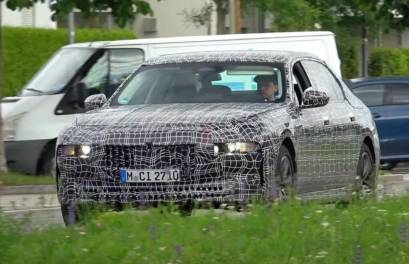 We know that BMW is working on the new BMW 7 Series . Judging by the latest sightings, the German carmaker’s large sedan will have headlights with headlights arranged on two levels.

The first digital designs published on the Internet, based on recent “stolen” shots, show that the front of the Series 7 2023 will consist of LED headlights at the top of the engine hood and head units arranged underneath. The latter should have a rectangular shape.

Note that BMW will keep the double kidney grille used up to now, so no changes are expected in this case. We know that in addition to the new BMW 7 Series, the X7 will also have dual headlights, as evidenced by some prototypes tested on the Nurburgring circuit.

It should arise on an updated version of the CLAR platform

Based on the latest news leaked on the Internet, the new makeover of the 7 Series will be based on an updated version of the CLAR platform. Under the hood we will find a number of engines to choose from gasoline, diesel, plug-in hybrids and fully electric.

However, there will be no variant with V12 as confirmed by the Bavarian automaker a couple of years ago. Finally, the BMW 7 Series 2023 is expected to officially debut by the end of next year.