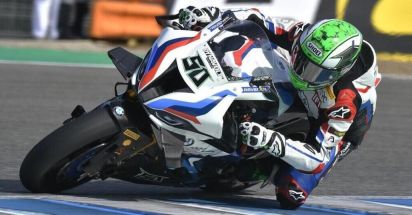 Loris Baz and Eugene Laverty will be part of the Bonovo Action BMW 2022 Team. The Northern Irishman will continue to develop the new M 1000 RR in place of Sykes

After Michael Van der Mark and Scott Redding, the BMW family is expanding with two new riders who will race in the Bonovo Action satellite team: Loris Baz and Eugene Laverty . As we had already had the opportunity to write, the Frenchman refused the proposals received by Moto America and the GoEleven team, to accept the most economically advantageous one from the German manufacturer, even if he supported the satellite team that Tom Sykes had refused.

As for Laverty, on the other hand, his confirmation gives continuity to the work that both Sykes and Laverty (minimally) had started two years ago. After having supported it with the nonexistent RC Corse team, BMW now assigns it to the Bonovo team which only debuted in Superbike last year, with the hope of having better luck than in the current season. He comes out of the project of the German house Jonas Folger who for now it is not known whether or not he will continue his competitive activity.

Here are the statements of the two pilots.

Eugene Laverty : “I am very happy to continue with BMW Motorrad and join the Bonovo BMW Racing Team for the 2022 World Superbike season. It’s great to stay in the BMW family in WorldSBK. The last six months have been tough for me as a driver and so I am very grateful for the continued support and trust gained from everyone involved in this project. I am very motivated to repay that trust with my skills and I am confident that after a solid winter test campaign we will be ready and competitive in the first round ”.

Loris Baz : “I’m really happy to be back in WorldSBK, so I want to thank BMW and the Bonovo BMW Racing Team for giving me this opportunity. I think I have shown during these two rounds in Spain and Portugal that I have the pace to fight among the leaders in this championship. BMW is the brand that has grown the most in the second half of the season. I watched closely how the bike was improving. I have already raced with BMW so I know a lot of people there and I also raced with MGM Racing for a race in 2012. I am really happy and excited about this opportunity and can’t wait to try the bike and start working together. to the team and the German house. Thanks again to all the people involved in this project. “