At least a couple of patents concern applications for a new four-cylinder CBR1000RR series. These are the variable valve timing and more compact radiators.

Afew days ago we updated you on the Honda patent dedicated to a new super sports bike that could be the basis for the future superbike version .

Also from the Japanese patent office arrive other patents filed by Honda in 2020, but published precisely this year, relating to a four-cylinder in-line engine that could replace the current unit present on the CBR1000RR series.

The first patent relates to a variable valve timing system for distribution. It intervenes both on the opening and closing diagrams and on the valve lift and is applied to the eight intake and eight exhaust valves. 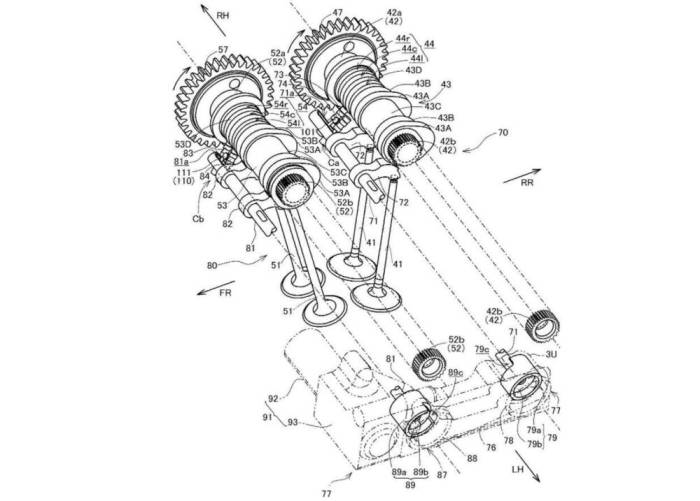 Each valve has two eccentrics according to a principle seen for example in the BMW Shiftcam system . But there are important differences.

Each cylinder has its own sliding control unit and, depending on the engine parameters set, an electronic control unit activates a solenoid valve . The latter regulates  the flow of oil which determines the displacement of special pins in the sliding sleeves of the camshaft that supports the two lobes: the first or second cam of each valve is thus activated.

One offers a more sophisticated diagram than the other, both in terms of the diagram, the intersection and the elevation.

This device offers an improvement in power delivery , which is important for the exploitation of torque in a higher range of use, and allows for better control of polluting emissions when the engine works with certain loads.

In the drawings filed, this engine has been inserted in a chassis similar to that of the current CBR, but it is only a matter of formal requirements. 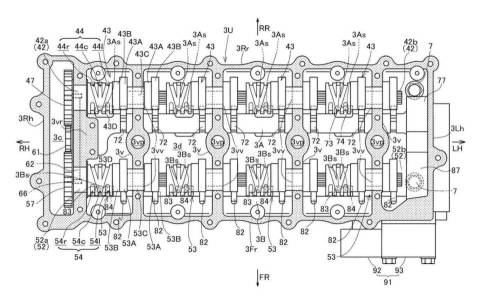 The second patent is dedicated to new coolant radiators .

There are two that have a V-shape and differentiated thickness , greater at the top and which is reduced going down towards the lower limit, in order to have a large surface, reduce the front section and not interfere with the wheel to also have the engine in position. more advanced.

The third radiator has an innovative circular shape , also in this case its thickness is greater in the upper part and is reduced towards the lower one, and has a hole in the center for the housing for the cooling fan motor . This is also a solution designed to contain the overall dimensions .

As always, it is difficult to predict if and when these patents will see application, but Honda’s commitment to developing innovative systems dedicated to super sports models remains.