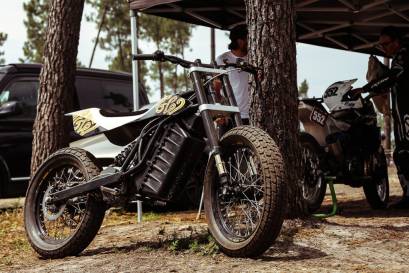 Previously, we discussed Trevor Motorcycles’ electric flat tracker concept dubbed the FTR Stella extensively in April 2020. The DTRe Stella, as it has now been named, would have been unveiled sometime in 2021 after being inspired by two off-road motorcycle enthusiasts. Sadly, the global pandemic was to last longer than anyone had expected, and inadvertently threw a spanner in the works of this electric machine.

The Trevor DTRE Stella is the brainchild of Jeroen-Vincent Nagels and Philippe Stella, and it is an exciting flat tracker concept that brings the styling and riding dynamics of conventional, gasoline-powered flat trackers to the electric motorcycle world.

A Canadian investment fund recently raised more than €1 million from the company, according to recent news. As a result, the company gains significant leverage, as well as a financial boost that will enable it to accelerate development of the DTRe Stella.

Jeroen-Vincent Nagels, Co-Founder of Trevor Motorcycles, stated in a report published by The PACK, “This investment enables us to continue to grow and begin production.”. It’s great to finally be able to take our Trevors on the road.

Despite the challenges associated with the health crisis, all the teams involved in the project have worked so hard to keep development and manufacturing going. This is a great achievement for the entire team!Following the recent investment, Trevor Motorcycles now has a market value of more than €5 million.

Trevor DTRe Stella is powered by an 11 kW, 260 Nm brushless electric motor, which is connected to a 2.7 kWh lithium ion battery designed by Belgian company Saroléa. The motorcycle can reach a top speed of 95 kilometers per hour thanks to its electric drivetrain.

This tracker features classic flat tracker styling, upright ergonomics, and long travel suspension, so it can traverse any terrain.On Trevor Motorcycles’ official website, reservations for the Stella, in either an off-road-only version at € 12,995 ($15,334 USD); or a street legal version at € 14,495 ($17,104 USD), are now being taken.