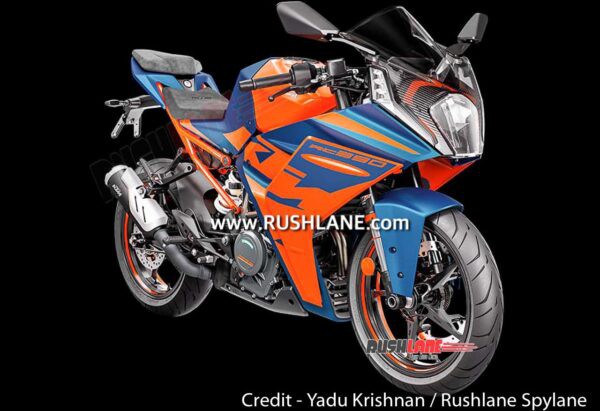 The website rushlane.com has released images of the All New KTM RC390 sports bike that have been leaked online. Before launching soon, let’s take a look at the details together. (Photo credit by Yadu Krishnan)

The All New KTM RC390 promoter comes with a two-tone color scheme of blue-orange. A new single LED headlamp has been designed to replace the original dual projector headlamps. It appears to be the same light as the classmate 390 Duke. but covered with fairing while the fuel tank seems to be bigger than before (Current look, spot can get 9.5 liters)

And another interesting change is The driving position of the All New KTM RC390 body has been revamped with a more relaxed ergonomics. Notice from the position of the handlebars that are slightly higher than the original.

And the footrest is positioned indented forward more than ever. The height of the pillion seat that is just right Therefore, compared to the current look It seems that this new car will be more sport touring. And the fairing as a whole has been redesigned as well.

The engine will still come in a 373cc single-cylinder, liquid-cooled. Provides a maximum of 43 horsepower and a maximum torque of 35 Nm, paired with a 6-speed gearbox. Seen now, there will be a front suspension Upside Down, a Monoshock rear, a new exhaust pipe.

TFT display screen that can be connected to Bluetooth including the possibility of having Anti-roll system, ABS system, quick shifter (but have to wait and see when it’s actually launched again)